One smart card reader accessible from many computers

In 2010 I wrote the article "PC/SC client and server on two different hosts". At that time OpenSSH was not able to redirect Unix sockets.

I just received a request to (re)do something similar. Of course, I forgot I wrote this article 12 years ago. So I started searching for a solution, again.

Since OpenSSH 6.7 (released in 2014) it is possible to redirect Unix sockets over the network.

The normal pcsc-lite use case is described in the figure bellow:

The goal is to have 2 computers connected by a network and transfer the pcsc-lite internal connection over the network as described bellow:

On computer1 you have your smart card reader(s) connected and pcscd will run as usual. You do not need to change your pcsc-lite configuration.

A user on computer1 is able to connect to computer2 using ssh and run something like:

Note that the socket on computer2 is and not as on computer1. That is because of access rights restriction. Only root is allowed to create files in .

Otherwise I get the error:

So I create the socket on computer2 in instead.

On computer2 you define the pcsc-lite socket path to use.

And you can run your PC/SC application as usual.

Connection in the other direction

It is also possible to do the SSH connection from the client to the server. On the client you do something like

It may be easier this way if the client is light terminal and does not have an ssh server running for example.

As you can see the access rights are limited to read & write for "rousseau" and no access for the other users. You may want to share the remote connection to other users in the client computer. You can do something like:

The administrator of the system is free to configure the access rights to use.

When you stop the ssh execution, the socket created on the client side is not removed.

So if you run ssh again you will get the error:

or (if the connection is used in the other direction): 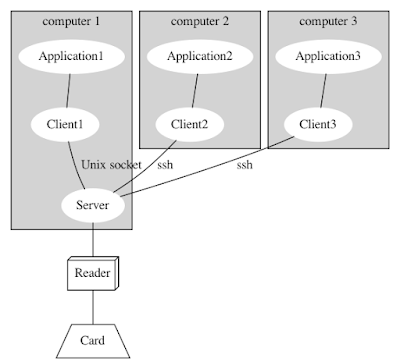 The pcsc-lite daemon pcscd will still play his role of resource manager. So if the applications are correctly written with PC/SC transactions to get exclusive access to the card, no problem is expected. i.e. no more problems than if the 3 applications were all running locally in computer1.


The internal pcsc-lite protocol is not sensible to 32 or 64-bits CPU differences. I have not tested a mix with big-endian and little-endian CPUs. I do not have a computer using a big-endian CPU. I am pretty sure that configuration would fail.

This architecture is a generalisation of accessing the pcscd server from the host and also from guests in virtual environments (described in "Accessing smart cards from inside a flatpak sandbox") but, this time, with remote computers.

I am sure people will find many original use cases for an architecture like this. Please tell me if and how you use it.

The bug "Unable to list readers inside flatpak, when pcscd runs on host." was very strange. It is not like the potential problem I described in "Accessing smart cards from inside a flatpak sandbox" where we have 2 sides (host & flatpak container) using different versions of the pcsc-lite internal protocol.

In the present case both sides are using the same protocol but SCardGetStatusChange() fails with a very strange error: Unknown error: 0x53204253. 0x53204253 is not a (valid) error code returned by any of the PC/SC functions.

After some debug I discovered that Fedora provides pcsc-lite packages with a modification.

This patch redefines PCSCLITE_MAX_READERS_CONTEXTS which is the maximum number of readers supported by pcsc-lite and update the value from 16 to 48.

And now we have a problem: the daemon is sending a list of 48 readers while the client is expecting a list of only 16 readers. After that, many bad things can happen, like incorrect return values.

The solution is simple: include in the flatpak container a client library that is configured like the server on your host i.e. patch the pcsc-lite included in the container.

The bad news is that the flatpak contained application will not be universal any-more. You will need 2 different containers for Fedora and for Debian for example.

According to the spec file this changes dates from June 2021:

So less than a year.

Increase the number of readers?

I guess Fedora/RedHat has one (or more) customer(s) with a need to support more than 16 readers. Maybe that is the case of 0.01% of pcsc-lite users (rough estimation out of my mind). And for some users 48 readers will not be enough (See "A reader for 96 smart cards? sysmoSIMBANK").

One option to solve the issue with Flatpak would be for Fedora/RedHat to revert the patches.

Flatpak applications with a need to access smart cards or tokens (Chrome, Teams) may be difficult to use on Fedora/RedHat.

Accessing smart cards from inside a flatpak sandbox

I received a bug report about "Unable to list readers inside flatpak, when pcscd runs on host." complaining that a smart card reader is not accessible from inside a flatpak sandbox.

I then discovered many other flatpak issues regarding smart cards access in https://github.com/flathub:

I never used flatpak so I start by trying to reproduce the problem.

The idea is to run from a flatpak sandbox using the pcscd daemon on the host. This is possible since the flatpak patch "Add support for PCSC socket".

Since the daemon () and the client library () use a socket ( by default) to communicate we just have to export the socket in the sandbox to allow the communication.

The important part for that is:

By default calls which is a Perl script. I do not want to include Perl in my sandbox so I create a wrapper to call with the -n argument to disable the use of .

If not then pcscd will complain with something like:

The protocol version major & minor is defined in winscard_msg.h.

The build is successful but the execution fails with:

And in the logs on the host I see:

The solution is simple: use the same protocol version on both sides.

If your host is using an old pcsc-lite using the internal protocol 4.3 then include an old (between 1.8.9 and 1.8.23) pcsc-lite in your flatpak image.

I know this is not perfect. It is then not possible to provide an application in one flatpak and deploy it everywhere and anywhere.

The protocol between the daemon and the client is internal to pcsc-lite. It has not been designed to be interoperable with something else, including older versions of pcsc-lite itself.

pcsc-lite is free software. So you are free to install whatever version you want.