A user reported a problem with a GnuPG v2 card and a OmniKey 4321 ExpressCard smart card reader. The same card works fine with a SCM SCR33x reader. 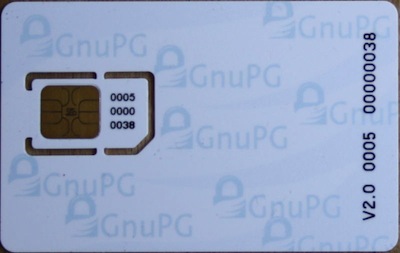 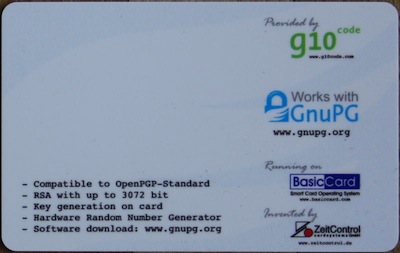 According to the GnuPG v2 specification:

The important point is highlighted. Of course you do not read the card user manual before buying a smart card reader for your card. And the notion of "Extended length" can be quiet obscure for a user.

The difference between the two readers is that:


I tried to document the problems with extended APDU in a special page Extended APDU support of the CCID driver.

But this is also obscure for a normal smart card user.

One major problem is that an application at the PC/SC level has no way to know if the reader does or does not support extended APDU.

I tried to propose a mechanism so that an application can know if the reader support extended APDU. The idea is that the application can display a human readable error message. That would avoid me to receive bug reports. But the idea was more or less refused by the PC/SC workgroup. Short APDU should be defined before defining extended APDU. And short APDU are not yet defined by the PC/SC workgroup :-(

One day I will blog about the PC/SC workgroup.

Extended APDU are more and more common. Maybe I should add a clear indication of the support or not of extended APDU in the reader matrix. If you have an idea of logo or presentation then just tell me.

In PC/SC sample in different languages I "promised" to give the implementation of the same sample program in many different programing languages. I am now less motivated and some languages have not yet been treated. PHP is one of them.

SCardSCR is a PC/SC wrapper for PHP4. As indicated on the web page:


SCardSCR is a PHP4 based project, and for many (good) reasons, it primarily targets Microsoft Windows (Win32/i386).

And since I am not an expert or even user of Windows I do not think I will ever work on this wrapper. I am also not a user of PHP.

The project is dated 17/01/2005 and is for PHP4. PHP5 is available since 2004. So maybe the SCardSCR  project is not really active/maintained anymore.

Note that my name is in the Credits :-)


Thanks to Ludovic Rousseau for his pcsc-tools package (C program and Perl scripts) that is the basis of most SCardSCR sample scripts.

I left as an exercise the writing of the sample.php program in PHP. If you write it just tell me so I can add it here.

Card auto power on and off

pcsc-lite 1.6.5 (not yet released but the code is available in the subversion repository or here) contains a new feature that was described in the TODO file as:


How to power off a card


After SCardDisconnect() the card is not used since the connection with the card is closed. It is the only case where the card may stay in the powered off.


The described scheme works great. One side effect is that the card may be powered off just before being used.

For example imagine the following scenario:

To avoid the double power on action a delay is used before powering off the card in step 3. The card is powered off only if the card is not used during 5 seconds.

For the same reason the card is not powered off just at SCardDisconnect() but after being unused during 5 seconds.


The compilation options are in the file src/pcscd.h.in.


You can change the 5 seconds delay before the automatic power off: PCSCLITE_POWER_OFF_GRACE_PERIOD. It looks like on Windows the delay is 15 seconds.

If you do not like the new feature then define DISABLE_ON_DEMAND_POWER_ON and you will continue to have the previous behavior.

If you do not want the card to be powered on on insertion then define DISABLE_AUTO_POWER_ON. With this option the card will be powered on only when SCardConnect() is called, not when the card is inserted in the reader. This has side effects and is not an innocent choice. SCardGetStatusChange() will report a card is present but will not report the card ATR. To get the card ATR you have to use SCardStatus() or call SCardGetStatusChange() once again after the card has been powered off using SCardConnect().

Impacts on the reader drivers

I modified my CCID driver to use the new function. I do not know any other driver supporting TAG_IFD_POLLING_THREAD and needing an upgrade.

If your reader driver does not support TAG_IFD_POLLING_THREAD the delay before powering off the card will be 400 milliseconds (PCSCLITE_STATUS_POLL_RATE) instead of 5 seconds.


The power consumption of the smart card reader should be reduced a bit when the card is not powered on.

Some readers have a LED to indicate the state of the reader. For example the Gemalto GemPC Twin reader has a blinking LED when the reader is connected and a still LED when the card is powered on. I generally use the LED to know if the CCID driver and pcsc-lite are working correctly. A still LED indicates the PC/SC layer is working correctly. With the new mechanism the LED is useful only during 5 seconds after inserting the card. A blinking instead of still LED does not, always, indicates a broken PC/SC layer any more.

Powering off the card is also a new step on the road to suspending the reader at the USB level, and further reduce the power consumption.

Ubuntu uses a special configuration of pcsc-lite. The libpcsclite.so.1 library is not in /usr/lib but in /lib. See the file list of the libpcsclite1 Ubuntu package for example. This is because libpcsclite.so.1 is used by the wpa_supplicant software and this software should be accessible before /usr is mounted. See Debian bug #531592 "libpcsclite1: move to /lib" and Ubuntu bug #44194 "wpasupplicant doesn't start when the network start"

By default pcsc-lite install its files in /usr/local but this path can be changed using the --prefix= argument. The standard way to install a software is to use:

This will install the daemon pcscd in /usr/sbin/pcscd and the library in /usr/lib.

The daemon provided by the pcscd package is replaced by the new one. But the new library does not replace the old one. So the system will have:


Of course programs provided by Ubuntu are linked with /lib/libpcsclite.so.1 so they will not use the new version. The old libpcslite will try to communicate with the new pcscd and since I changed the communication protocol that will fail. A typical example can be found in the support request [#312772] RPC Transport error:

The solution is to install the new version and also replace the old one. It is not possible to remove the /lib/libpcsclite.so.1* files since they are used by Ubuntu compiled programs.


So it is not a good idea to remove the libpcsclite1 package since that will also remove other packages (because of dependencies) like libccid libpcsc-perl libpcsclite1 network-manager network-manager-gnome pcsc-tools pcscd ubuntu-desktop wpasupplicant. It is not a good idea to install a non packaged software. But many people do this without knowing what they do. So I propose to help them and avoid answer the many bug report I get because of the special Ubuntu configuration.

Ubuntu solved the compilation problem. But it does not solve the usability problem.

The correct solution would be to load the libpcsclite.so.1 at run time using an explicit dlopen() only if the smart card is used by wpa_supplicant.
The smart card could only be used after /usr is mounted. But I think that is a very reasonable limitation.

In economy that is called a externality. In the present case it is a negative externality.

Ubuntu (for example version 14.04 and later) installs the libpcsclite.so.1 library in the directory

So be careful to use the correct arguments when re-building pcsc-lite.

People who have written most messages:

Best authors, by total size of their messages (w/o quoting):

Best authors, by average size of their message (w/o quoting):

Table showing the most successful subjects:

Graph showing number of messages written during hours of day:

Graph showing number of messages written during days of month:

Graph showing number of messages written during days of week: