I started working on pcsc-lite 10 years ago.


I do not have a trace of my exact first change in 2001. Maybe it was before CVS was used to manage the source code. The oldest trace I found is in the ChangeLog file:


I released version 1.0.2beta in November 2001. But I started hacking on the code a few months before that.

My first CVS commit is a test :-) now know under SVN revision number 23.

My next change (revision 24) is a "complete and automatic reindentation of *.c and *.h files". 54 files were affected by this patch. Yes, I do not like to work on badly formatted files.

I already blogged about pcsc-lite history in October 2010 in Subversion statistics for pcsc-lite at September 2010. You can also access a specific page for each maintainer. My page is here.

One nice graphic is the activity by hour. You can clearly find the two lunch times and sleep time. 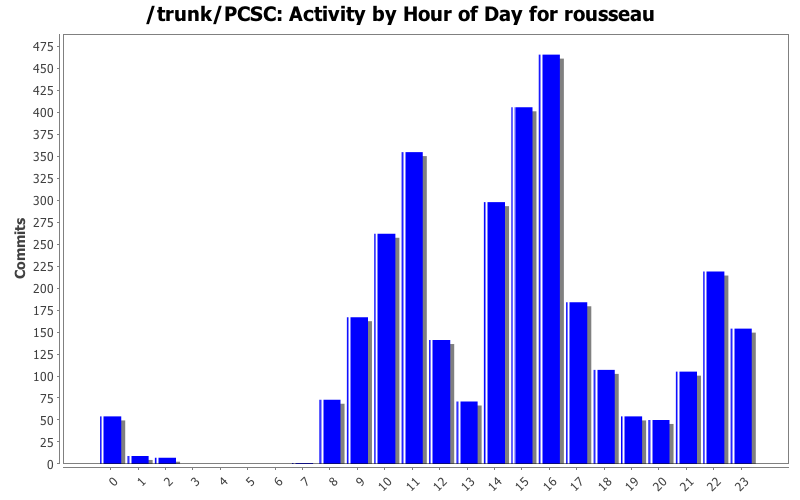 So I do not expect any change of the WinSCard API.

The pcsc-lite TODO list contains only 3 points.
Point 1: Apple has its own version of pcsc-lite, now hosted on http://smartcardservices.macosforge.org/. I don't think Apple is interested in merging their code with the "official" pcsc-lite version.

Point 2: It is more of less already possible by redirecting /var/run/pcscd/pcscd.comm (see PC/SC client and server on two different hosts). Or using another remote desktop solution like rdesktop.

Point 3: I do not have a laptop any more. So I have no idea of what is needed here. The only request I have is Debian bug #382282 "pcscd needs to be restarted across suspend" opened since Aug 2006.

I do not see any new blood on the MUSCLE mailing list working on pcsc-lite code. The pcsc-lite project may suffer from the bus factor.

I am happy to continue maintaining pcsc-lite for the next few years. Maybe I will also create a new blog entry for my 20 years with pcsc-lite.

Trying to fix compiler warnings is a good idea but should be made with extreme care, especially just before a release. I got caught by fixing "warning: variable `TCi' set but not used" the wrong way.

An application may need to know specific values from a smart card reader/driver. It is the job of the SCardGetAttrib() function at the PC/SC level. The list of possible questions is:

The PC/SC call SCardGetAttrib is implemented by redirecting the question to the reader driver IFDHGetCapabilities() method.

My CCID driver implements some of them.

The case of SCARD_ATTR_DEVICE_FRIENDLY_NAME is different. The driver does not know the reader name used at the PC/SC level. The name is chosen by pcsc-lite, not by the driver. See also a previous blog article: What is in a PC/SC reader name?.

So what pcsc-lite does is first ask the driver about SCARD_ATTR_DEVICE_FRIENDLY_NAME, and if the driver returns the error IFD_ERROR_TAG then pcsc-lite will answer itself with the name pcsc-lite selected.

_A and _W variants

pcsc-lite does not support UNICODE or ASCII modes. On Unix Unicode is encoded as UTF-8 instead of UTF-16 as on Windows. Since UTF-8 includes ASCII you do not need to differentiate two configurations.

Remote desktop solutions using RDP (Remote Desktop Protocol) like rdesktop or ICA (Independent Computing Architecture) like Citrix XenApp can also do remote smart card operation.
If the smart card reader is connected on a Unix system using pcsc-lite and the application is on a Windows system the remoting system must do some "translation" work. In particular if the application on the windows side ask for SCARD_ATTR_DEVICE_FRIENDLY_NAME_A the remote application must translate the question into SCARD_ATTR_DEVICE_FRIENDLY_NAME and convert it back to the correct encoding.

An application designed and tested on Windows may be surprised by PC/SC answers when run through rdesktop or Citrix XenApp. In that case the answers from the PC/SC layer comes from pcsc-lite and not from the Windows winscard library. Some services may not be supported like SCARD_ATTR_DEVICE_FRIENDLY_NAME on Mac OS X but expected by the application.

The Windows application designers should keep in mind that the PC/SC layer they are talking to may not be the one provided by Windows. It can be a PC/SC layer running on GNU/Linux, Mac OS X, Solaris or some other even more bizarre Unixes.