cardpeek: A tool to read the contents of smartcards

A few days ago I discovered a nice tool: cardpeek.

The project is hosted at http://code.google.com/p/cardpeek/.
It is Free Software and uses the GNU GPL v3 licence.

From the project web site:


Cardpeek is a Linux/Windows tool to read the contents of ISO7816 smartcards. It features a GTK GUI to represent card data is a tree view, and is extendable with a scripting language (LUA).

The goal of this project is to allow smartcard owners to be better informed about what type of personal information is stored in these devices.

The tool currently reads the contents of :

It can also read the following cards with limited interpretation of data:

It is easy to install under Debian GNU/Linux. You may need to install some dependencies related to the lua language. The program is written in C and lua. The parts sending smart card commands are lua scripts. I do not yet have lua in my list of languages for PC/SC.

You may be unable to run the ./configure script. I already reported this problem. run autoreconf -vis to get correct symlinks.

I tried with an EMV card. 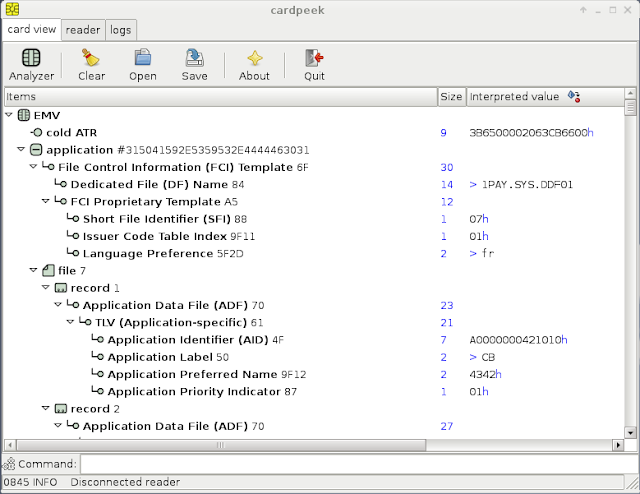 The application gives a lot of information. For example you have access to the card transaction records. 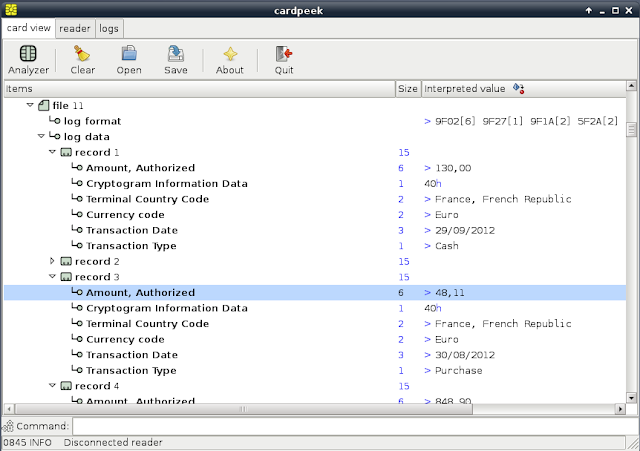 In this example I payed 48.11€ on the August 30th of 2012. This transaction was to fil the tank with gasoline but the card do not store information about the merchant.

I do not have a Navigo Pass myself so I reused the screen copy from the cardpeek project navigo page.


The "calypso" script included in cardpeek can read the content of Navigo cards used in Paris. It provides enhanced "event log" analysis notably with subway/train station names, as illustrated in the screenshot above. It has been successfully tested on Navigo Découverte, Navigo and Navigo Intégrale cards.

The support is SIM card is indicated as beta but does work quiet well.

For example you can dump the phone book stored in your SIM card. 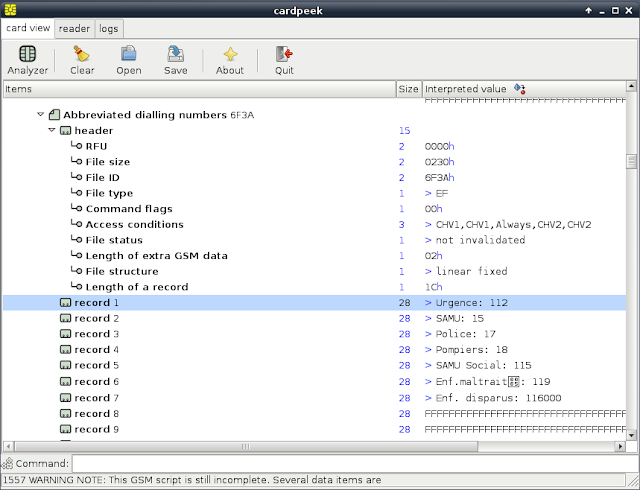 I guess it is in beta mode because not all the fields are parsed and displayed in a human readable format.

Cardpeek is a very nice tool to explore many common kinds of smart cards. It is tech savvy oriented.